Mondrian- using Shapes to represent the world around Us

By mrs todd December 10, 2017
Artists often use geometric shapes as a representation of the world that they see around them. This is often combined with primary and secondary colours to abstract more organic shapes and colours. Mondrian was an artist who took inspiration from Jazz music and the city around him. The lines and colours in this artwork entitled "Broadway Boogie- woogie" were his way of showing the syncopated beat in jazz music coupled with the grid pattern of a city. 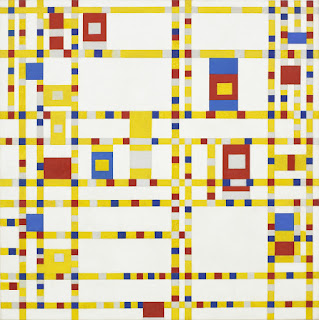 To learn about this abstraction process, the students first completed Mondrian inspired cubes. The students were given the net of cube as a base for their artwork. They drew inspiration from Mondrian's  artworks which they replicated using paper collage, sticking lines and squares over the net. This lesson could also be used for Mathematics looking at 2D and 3D shapes together. The resulting cubes were


Mondrian's artwork is a good example of abstraction, which is not using shapes to be representational of images or figures but using art to represent ideas or concepts. To help students understand this process we watched a clip from the movie "Inside Out".

The movie clip shows how shape moves from being representational to abstract. After watching the video, the students were asked to brainstorm ideas about how they could interpret Piet Mondrian's artwork in their own artwork. They were asked to consider designs such as:
The could use mediums such as collage, drawing or digital artwork which they could use to create their own interpretation.

The students completed this challenge with creativity and enjoyed having the freedom to use Mondrian's artwork as an interpretation. There were some creative results as can be seen from the artworks below:

If this unit were to be repeated, I would look further at Mondrian's other artowrks and the development that he made as an artist.


What was something new that you learned about Mondrian or abstract art? What would you change about your Artwork? What was the most successful part of your artwork that you achieved? Why?

Complete SEO Solution said…
I’ll be sure to bookmark it and come back to read more of your useful info. Thanks for the post. I’ll return.
administrative law essay assignment help

Victor Bradford said…
Only if students had a magical pencil to complete their assignment on time, they wouldn't have to fail classes anymore! Well, 5 Dollars Essay doesn't have a magical pencil but they do have a brilliant team of writers that work round the clock to create top-quality assignments even on short deadlines. Yes, you have read that, right! Whether it's a political essay or an assignment about law, get them all done from us at the most cheap essay writing services rates. Head to our website and place your order now!

Harry Adam said…
SMEs Business Strategy Guide| Business Growth Consultant Online - Mario Peshev:Whether you’re at the helm of a new or growing company, you may need a business growth consultant or a small business development strategist to guide you to success.

Thomas said…
Mondrian art is a good example of elimination, which is not the use of patterns to represent images or figures but the use of art to represent ideas or concepts. I can get full-stack developer now. To help students understand this process we watched a clip from the movie “In The Street”. The film clip shows how the designer is going from being an agent to a vaccine. After watching the video, students were asked to reflect on ideas on how they could interpret Piet Mondrian’s art in their own art.
7 July 2021 at 00:59

By mrs todd July 02, 2017
Our cross country team ran their best and showed great sportsmanship. Merit Award winners were given for effort at our recent Gala Day and for Science. The first our Silver Behaviour Awards. They went to a Movie Afternoon. Our Bronze Award achievers will be getting a hot chocolate and cookies.  Well done to all our Award Winners this term. It's always fantastic to be able to share our students achievements and recognise their efforts.
4 comments
Read more

Creating and making with textiles

By mrs todd June 20, 2018
This term, we have been looking at using textiles as a medium for creativity. Using wool or natural fibres to create something wearable is an ancient art. Some of the best memories that I have, when growing up was of creating felt and dyeing fabrics. This was the inspiration for the project for my Creativity project. After approaching our agricultural department for some raw alpaca fleece, the first step was to was this very dirty fleece. This was dirty, but a lot of fun! After it had dried, we dyed the wool and then felted it. The felting process takes a lot of work, hot water and soap. It requires the wool to be placed into a tea towel after it was carded to get rid of the rest of the dirt. There was a lot of enthusiasm to have a go. Rubber gloves were essential to protect little hands! This took much longer than anticipated so we have used purchased felt to make our creations The next step was to learn to sew using a needle and thread. To help this pro
11 comments
Read more