The Mock Trial Of William Bligh 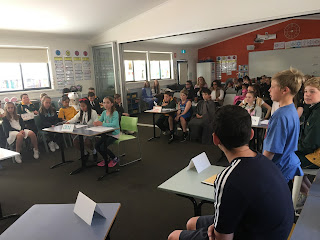 Book Week provides the opportunity for looking at new books. One of the books that we looked at was the book was a book called "William Bligh: A stormy story of Tempestuous Times". It focuses on the life of William Bligh and how he figured in Australian History.

As part of our book week celebrations, we put on a Mock Trial of William Bligh. The idea was to place Bligh on trial for his involvement in the events that led up to the Mutiny of the Bounty. It also put our public speaking and speech writing skills that we have been developing this term.

To get our trial underway, the students were placed in groups and assigned roles for the trial. They developed notes, speeches, and questions. The students took the challenge up with enthusiasm. We used resources from TES to help understand the roles:


We practiced the trial by setting the classroom up as a court based on the following diagram:

The students had prepared well and it all went relatively smoothly. The speeches and questions had been well considered, while also basing their thoughts upon evidence that had been found in research.

The advantage of a mock trial is that the students learned a great deal about the Mutiny of the Bounty than if they had just researched and then presented a poster. They also took on the roles of different characters, asking questions and developing their speech writing.

The students listened to the speeches made by the lawyers and their clients. The Judge summarised the events and then asked for the Jury's verdict,

It turns out that the Jury's verdict was that William Bligh was guilty of the charges. Our defendant made a run for it but was managed to be apprehended!

What did you enjoy the most about our Mock Trial? What would you change?